The Nancy and G. Timothy Johnson Center for Science and Community Life 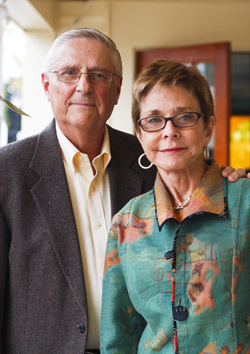 North Park University has just opened the Nancy and G. Timothy Johnson Center for Science and Community Life, a state-of-the-art facility that will house laboratories and classrooms for our signature science programs as well as provide ample space for student interaction and the campus offices that serve our community life.

This building is named in honor of Dr. Tim and Nancy Johnson, alumni and longtime friends of the University who “define a life of exemplary service,” according to the Board of Trustees when it affirmed the naming decisions. The couple has also dedicated much time to helping others catch the vision for what this addition to campus will mean.

“Since we both trained in the medical sciences, we know how critical good facilities are in science education,” they said recently. Currently, North Park’s science classes are taught in Carlson Tower, a building that was opened in 1967. “The new science building will offer the teaching and research resources that our outstanding faculty and students deserve, and have every right to expect.”

Programs that will move out of Carlson Tower and into the Johnson Center include biology, chemistry, mathematics, physics, and psychology.

Both of the Johnsons came to North Park as students because they were “born and raised” in the Evangelical Covenant Church, the denomination affiliated with the University. They said that it was assumed they would come to North Park because of this connection, and that perhaps they could have been a bit more thoughtful about this big decision. “But the truth is that we have never for a moment regretted our decisions,” they said. 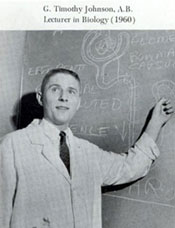 Dr. G. Timothy Johnson graduated from North Park College (now University) in 1956, and earned a degree from North Park Theological Seminary in 1963. During his time as a graduate student, he worked on campus in a variety of capacities, including as assistant director of admissions, lecturer in the biology department, and helping to coach the college’s debate team.

Nancy Johnson was trained as a nurse at the Swedish Covenant Hospital School of Nursing, just down Foster Avenue from North Park’s main campus in Chicago. This program included science courses at the College. Her nursing career included short term assignments in Indonesia and Haiti.

During his time as a debate coach, Dr. Johnson advised students debating the resolution “that the United States should adopt a program of compulsory health insurance for all citizens” with several colleges in the Chicago area.

In recalling their own experiences as students at North Park, they both remember the “personal touch” at the heart of their experiences. Their professors really got to know them as individuals, not just numbers in a classroom. These connections continue in our classrooms today and, according to the Johnsons, is “what makes all the difference” in North Park’s students being successful.

Naming the building for the Johnsons recognizes their service to the University, and as lifelong stewards of its mission and values, said David Helwig, Thousand Oaks, Calif., chair of the University’s board of trustees. “Tim has tirelessly championed the need for this new facility to prepare North Park’s students for demanding careers in modern science, medicine, and nursing. Nancy likewise is deeply committed to this important mission,” he said.

“Given our perspectives as a doctor and nurse, we are very excited about the future of North Park in preparing students for these vocations — and other roles in science,” the Johnsons said recently. “Frankly there are many colleges that can offer a good science education. What North Park offers in addition is a true urban educational experience in a faith-based environment. We think that combination is hard to beat and would recommend North Park to any prospective student interested in the sciences.”