To a Bold and Distinctive Future

Effective university leadership requires decision-making whose merit is often revealed and confirmed only with the passing of time, often measured in years or decades. Leadership at this level—for a president perhaps, but especially for a Board of Trustees—might often be understood as an act of faith. Trustees make decisions with “the assurance of things hoped for, the conviction of things not seen” (Hebrews 11:1).

In the story that is North Park, there are abundant examples of such faith-filled leadership. Three are especially notable for us because the outcomes of these decisions have been achieved in our generation. Our University today rests on the faithful shoulders of trustees from some decades ago.

Shall We Relocate Our Campus?

North Park trustees gathered in the spring of 1980 and collectively chose to commit the school to the singular task of “seeking the welfare of the city” (Jeremiah 29:7).

After some 80 years at the corner of Foster and Kedzie Avenues, our institutional leaders wondered whether the college should remain in the city. Land was offered for a new campus in the countryside; should we sell our buildings and construct a new campus further away, or should we remain on our historic campus? The answer, from our trustees, was a resounding affirmation of our historic location. “We’re staying at Foster and Kedzie,” the trustees decided. And with this single acclimation, the voice of North Park College and Seminary was confirmed as a voice in and for the city.

Now, some 35 years later, we recognize what a critical force—a true tipping point—this decision was for identifying and securing the school’s future trajectory. In 2008, for the first time in world and American history, 50 percent of people around the globe and in America live in cities. By 2050 (which is securely within the working lifetime of today’s undergraduate), more than 80 percent of the world’s population will live in cities. (See Chart 1) Like no other time in history, cities shape the world in our day, and Chicago shapes our students. Because of a bold decision by the Board of Trustees in 1980, North Park University today is ideally situated to embrace this future reality.

Shall We Welcome Others?

In the summer of 1980 when the Chicago Tribune covered the news that North Park would remain in Chicago, a reporter noted that “if the school left the city it would lose its rich diversity of students.” Interim President Art Nelson responded to the reporter, “We do not follow the course of a lot of other denominational colleges who simply want to resource their own people.”

Fifteen years later the Board of Trustees returned to this commitment in earnest. Reminded that David Nyvall, our first president, described North Park in its infancy as a school where “hospitality is especially insisted upon,” trustee Kristine Strand (now chair of the Board) prompted her colleagues to adopt a more intentional commitment to welcome others to North Park.

One early step by the Board, in 1995, was to establish a multicultural committee as part of the Board’s organizational structure. Within a year this committee recommended that the University administration undertake a “census of ethnic/cultural representation in all areas (students, faculty, and administration) and determine what are the procedures and processes being developed to culturally inculcate a growing multicultural presence at North Park.”

Initial progress toward meeting these objectives was slow; it came through a gradual change extended over two decades. Yet, time would tell the strength of this commitment. In February 2016 The Chronicle of Higher Education called attention to the fact that North Park is “one of the few evangelical colleges where the number of minority students now equals white students.” Indeed, 20 years after the Board’s initial attention to this commitment, North Park has achieved an undergraduate and graduate student body in which there is no single ethnic or racial majority. (See Chart 2)

Today North Park mirrors the community Jesus described in Luke 13: “And then the people will come from east and west, from north and south to eat in the Kingdom of God.”

Shall We Advance in Science and Health?

In recent decades one popular claim about North Park has been that it has strong programs in science and nursing. The bachelor of science in nursing program was introduced in 1958, in partnership with Swedish Covenant Hospital. Programs in the sciences were greatly improved in 1966 with construction of Carlson Tower and the Wikholm Laboratories, and with highly effective teaching, students became competitive in applying for graduate study in the sciences or medical school.

Decades later, however, these strong programs required expanded technologically advanced facilities. Upon assessment of the need, in 2008 the Board of Trustees approved initiation of a $47 million campaign to raise funds for construction of a new science and community life building. By the spring of the next year, however, the American economy had collapsed in a global economic crisis. During the first two months of 2009 the S&P dropped in value by 18.62 percent, and by March the Dow Jones Industrial Average Index had dropped by more than 50 percent from its peak in October 2007. Clearly, this did not appear to be the right time to launch the University’s largest fund-raising venture.

The Board of Trustees gathered in May 2009 to assess the environment. Rather than retreat, the Board chose to step forward by faith. The need for a new facility remained; yet because the University’s invested resources had declined in the economic crisis, the target for the campaign needed to be increased. In faith, the Board affirmed moving forward with the campaign, and increased the goal to $57 million.

Five years later, in the summer of 2014, Campaign North Park topped out at commitments of more than $63 million, and the doors were opened for the Johnson Center for Science and Community Life. (See Chart 3) Not only had the Board of Trustees led as an act of faith, generous friends of the University from across the country responded in like manner, giving as an act of faith at unprecedented levels. The addition of the Johnson Center permits us to advance curricula in science and health. In recent years we have added undergraduate programs in biochemistry, molecular biology and biotechnology, sports management, and health science, along with a post-bachelor’s program in medical science and a master’s degree in counseling psychology. In the near future we have potential to introduce programs in community health education, nutrition, special education, medical writing, and gerontology, along with new graduate programs in occupational therapy, athletic training, and health care administration, among others. 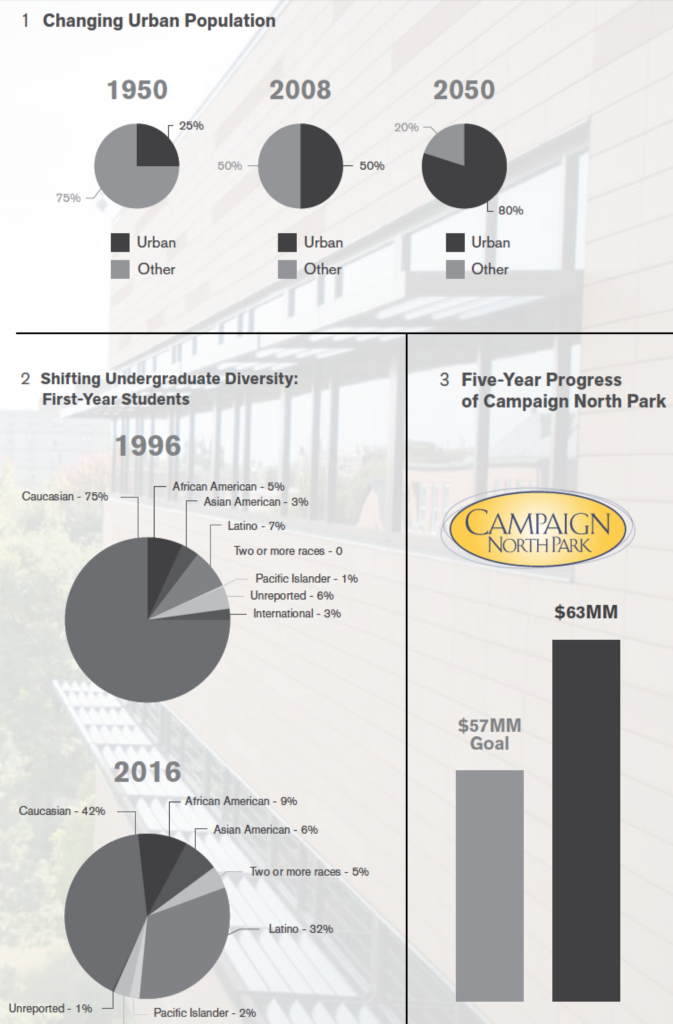 How Do We Act in Faith Today?

Today North Park affirms an identity framed by three intersecting values: Christian, city-centered, and intercultural. Throughout our history, we have sought to nurture Christian faith. More recently, as affirmed in 1980 and 1995, we are dedicated to engaging Chicago as our classroom and to embracing and valuing all people. Building on these shoulders, where will an act of faith today direct us for tomorrow?

In May 2016 the Board of Trustees affirmed a new aspiration: North Park University will be distinguished as the nation’s leading city-centered Christian university during the coming decade and beyond.

Within this context we expect that the University will:

In like manner, we expect our graduates will be:

In this context the Board of Trustees identified seven areas targeted for priority attention, with plans to be developed annually for approaching our aspiration.

Leveraging the city as a place of learning, for both in-class and out-of-class programs.

Early examples include a semester-long Chicago Intensive curriculum, piloted in spring 2016; a new format of the weekly class schedule permitting all students to Engage Chicago through every course, to be introduced in Fall 2017; and ongoing program expansion in the sciences and health.

Nurturing spiritual growth for all students, faculty, and staff.

Complementing a robust program in University Ministries, in Fall 2017 we will introduce a new living-learning community located in a campus residence hall, dedicated to advancing Christian discipleship in an increasingly urban and global world.

Adoption of a new CRM has enhanced our ability to connect and communicate with prospective students, track their progress toward admission, and encourage their selection of North Park as school of choice.

We continue to strengthen our recent collaboration with One Goal, Chicago’s premiere college-readiness program, and partner worldwide with organizations such as Spark Ventures to support our Global Partnerships initiative.

Stewarding our resources—financial, faculty and staff, technological, and physical—to support the educational needs of students.

A comprehensive student-housing review is underway; a new signage system will be introduced to the campus during the coming year; an assessment of student financial need and scholarship requirements is underway; and the Board of Trustees is evaluating the potential for our next fund-raising campaign.

In 1941, 50 years after North Park’s founding, historian Leland Carlson described North Park in its very earliest days as “a work just beginning.” We are wise to continue to think of North Park today as Leland Carlson thought of it in his day—to envision North Park today as “a work just beginning.” In doing this, we can hold an aspiration for North Park’s future as bold as the 1980 decision to remain in Chicago, as inspiring as the commitment in 1995 to become a university for all students, and as outlandish as the choice in 2009 to advance a fund-raising campaign in the midst of an economic recession—all and always for God’s glory and neighbor’s good.

Who we are today is rooted in the legacy of our first 125 years. North Park University is strong today because this school was formed as a city-centered learning community, nourished by its church heritage, framed by an immigrant sensibility, and guided by a commitment to extend access and equity in education.

Acts of faith in years past, demonstrated by trustees and many others, have guided North Park along each step of its journey. The future of North Park now rests in our hands. Acts of faith undertaken today, some larger and others smaller, mark the trajectory of our institutional future.

We aspire today to a bold and distinctive future for North Park, emboldened by the faithfulness of those who have come before us. We stand on the shoulders of many, holding in our hands the future of “a work just beginning.”