Director of Alumni Relations Melissa Velez Luce presented the 2017 Distinguished Senior Awards to Rachael Evangeline Greco, Batavia, Ill., and Nicholas A. Collar, Deerfield, Wis. during the Honors Convocation on April 24. This honor is bestowed each year to one woman and one man from the graduating class, recognizing extraordinary leadership, dedicated service, superior academic performance, and embodiment of the University’s mission of preparing students for lives of significance and service.

“As part of the selection process, six nominees were invited for interviews, where a committee had the chance to learn about fascinating research projects, passions for social justice and teamwork, volunteerism, honors they’ve received and challenges they’ve overcome,” Melissa said. 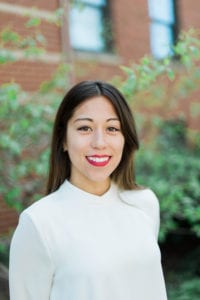 Rachael Evangeline Greco, a business and economics major, has spent her North Park years in academic overload just about every semester. She co-leads North Park’s chapter of International Justice Mission, raising awareness about the international, national, and local issue of human trafficking. She’s a Fellow for the Future of the Carnegie Council Global Ethics Network, working under Dr. Ilsup Ahn to raise awareness on campus about selected global ethics issues. When she’s not participating in these North Park responsibilities, she’s been working 25-hours a week and volunteering at the Vietnamese Association of Illinois, teaching English to Vietnamese immigrants.

She was also granted a Fulbright U.S. Student Award for 2017-2018. She will be spending the next year teaching English in Vietnam and plans to continue working at Morningstar, Inc. where she’s interned. She hopes that working in finance will give her opportunities to “create a positive social impact in developing communities through business ventures.”

Rachael was nominated by Professor Pam Schilling. “There is not a better example than Professor Schilling that demonstrates the depths that the faculty here are willing to go for their students. I have spent countless hours in her office as she mentored me through degree changes, course selections, and pushed me to pursue challenging opportunities. I am forever grateful to her and the other faculty here at North Park that have supported me through my academic career.”

She says that she chose North Park for three reasons: its location, the faculty, and the Fulbright reputation. “It was very obvious to me after visiting campus back in 2013 that the professors here want to be engaged by and interact with their students.” She remembers the advice of Dr. Linda Parkyn early in her pursuit of a Fulbright Award: “I remember her telling me to just keep doing what I was doing.”

Her North Park highlight? Her relationships with faculty members. “My experience with the faculty is hands down the best experience I’ve had at North Park. Again, the faculty-student interaction was one of the reasons I decided to come here but I never anticipated how close I would end up getting with my professors.” She is grateful for opportunities she’s had to conduct research with a philosophy professor, work closely with an education professor, and to be mentored by a Spanish professor. 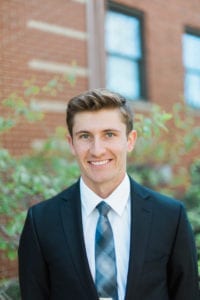 The second recipient of the 2017 Distinguished Senior Award, Nicholas A. Collar, is a biology major and a busy guy. He’s worked in clinical lab research at Swedish Covenant Hospital designing and implementing studies, investigating diagnoses, and gaining proficiency in interpreting medical information. He had the Hugh Edmondson Research Fellowship at the UC Davis Medical Center during his 2015 summer break where he implemented a study sequencing data from blood samples that were positive for Hepatitis B. There he also participated in several shadowing experiences ranging from observing a tumor board meeting, bone marrow biopsy procedure, and the daily tasks of cytology and histology specialists. Nicholas has his sights set on medical school after taking a couple of years off.

His experience isn’t only academic. For several years, Nicholas traveled to rural parts of Honduras, to bring adequate medical care to the local residents in need. He led the 2017 trip as the president for the Honduras Medical/Public Health Brigade, coordinating logistics of the 25-person group, planning and carrying out meetings with group members, board members, and advisors from Honduras and North Park University. While in Honduras, he staffed a multi-station rural clinic that treated 729 patients in three days and worked with the group to construct three sanitation stations all of which significantly improved the public health standards in the region.

When Nicholas isn’t doing lab research or serving his community, he’s a teaching assistant in North Park’s science department. He worked under Dr. Rholl as a microbiology assistant which taught him the behind-the-scenes work in preparing and maintaining a microbiology laboratory. He’s also worked as an anatomy and chemistry tutor and a summer pre-medical student advisor. Nicholas was one of two student advisors responsible for planning, coordinating and orchestrating a 10-day pre-academic year camp for incoming freshman interested in pursuing pre-medical routes at North Park University, and he’s enjoyed continuing relationships with the participants of this program — all of whom are still enrolled and succeeding at North Park.

Nicholas has had wonderful opportunities to work alongside North Park’s accomplished faculty people. One year, he met Dr. Nelson two mornings a week in the Cadaver Lab to dissect Rush Medical College cadavers. “Utilizing this non-class related resource was one of the most significant learning experiences I’ve had at North Park.” Nicholas shadowed Laura Zakowski M.D at University of Wisconsin Health, Mark Collar M.D. at St. Mary’s Hospital, and several others at UC Davis Medical Center. “All of these experiences gave me insight to the level of professionalism needed in my future line of work.”