Students Embark on Service and Learning Trips Across the Globe

Students Embark on Service and Learning Trips Across the Globe 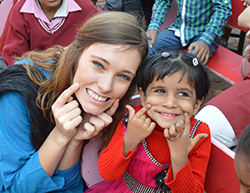 But as ministry models have changed and ideas of service have grown, North Park’s University Ministries started asking if that was the best way. Were these limited-impact trips the essence of global missions? Was it an element of how the University wanted to prepare students for lives of significance and service? Nearly 10 years ago, these questions led to the transformation of what used to be “mission trips” into Global Partnerships.

“Our focus in Global Partnerships is on building relationships, on serving in collaboration with an organization that has an established presence in a community, and on learning,” said Julia Styles, Global Partnerships coordinator. She came to the University in 2007, and has actively worked to establish new partnerships with organizations that can provide both hands-on service and educational opportunities for North Park students.

“We want to join in work that God is already doing. We never just go on our own to a location. We can only be there for a week, maybe two at the maximum, and that’s not a sustainable ministry model,” Styles said. “So we’re always working under a local partner that’s serving day-in and day-out.”

For many trips, North Park is able to partner with Covenant World Mission, an arm of the Evangelical Covenant Church. This relationship puts students in touch with women and men who are full-time missionaries around the world in a wide range of ministries. Other frequent collaborators with Global Partnerships include Spark Ventures, an organization working in Zambia and Nicaragua, and the Center for Student Missions, which provides urban mission and service experiences. Some academic departments, like North Park’s School of Nursing and Health Sciences, also serve as important partners for students’ hands-on practical learning as they provide care in clinic settings. According to Styles, these ongoing relationships ensure students are serving around the world with groups that are trusted while also opening up possibilities for internships, jobs, and continued relationships even after students graduate from North Park.

“Our partnerships also go beyond the people that we’re serving with on trips,” Styles added. “Our generous donors, local organizations, and churches also support us along the way, and we’re grateful for them.”

Styles herself has been to all but one of the Global Partnerships locations. Each year, there are between 10 and 13 trips, and around 140 participants, mostly students but including faculty or staff advisors for each group. In some years trips have taken place over spring, winter, and summer breaks. All trips are funded through student-raised donations—around $200,000 each year, in total.

Ten partnership trips take students around the world in 2014

This year, six Global Partnerships trips took place over March’s spring break, with another four to come just after the academic year ends in May. These experiences in Alaska, Appalachia, Ecuador, India, Israel and Palestine, Los Angeles, Mexico, Washington, D.C., and Zambia challenge students to step outside their current ideas about faith, service, and justice to learn something new and build relationships with the global church. Global Partnerships aims to keep the idea of service learning at the core of each trip, which, according to Styles, isn’t just about volunteering but requires an attitude of reflection on how that service applies to your own life.

Kristen Coughlin, a first-year student, decided to take a chance and spend her first college spring break on the Appalachia service trip. “This was actually my very first mission trip,” she said. “It was so exciting.”

The Appalachia team partnered with an organization called the Appalachia Service Project, whose goal is to make homes warmer, safer, and drier. They host volunteer groups of all ages from across the country to serve throughout the Appalachian region doing manual labor projects.

“My group took out all the insulation from underneath a house and replaced it all, and replaced flooring in the kitchen—a lot of work that I never thought I’d be doing. It was really fun, and I feel really confident with power tools now,” Coughlin said.

North Park students divided up into smaller groups to work on multiple homes, and then gathered as a large group in the evening for dinner and reflecting on their service-learning experiences.

“My favorite thing was relaxing with our team and having down time—just spending time together. We shared so much laughter and so much joy on that trip. It was awesome,” Coughlin said.

Dylan Steensland, also a first-year student, was looking for a spring break experience that was more about education and advocacy than manual labor. He chose the Washington, D.C. trip where students partnered with Bread for the World and Sojourners to learn about hunger, immigration, and mass incarceration before heading to Capitol Hill to meet with Senators and Representatives to discuss the issues.

“I’ve taken mission trips before, but this was an experience that was vastly different,” Steensland said. “It was really about getting out of our comfort zones to learn more about important issues.”

The Washington, D.C. trip is one way that Global Partnerships is helping students explore what Styles described as the tension between wanting to change the world and realizing that systemic change takes longer than a week or two.

“So many students these days want to make a difference. They believe in significance and service, and that’s why they’re here, but realizing that difference might take a generation is hard to swallow,” she said.

In Israel and Palestine, students learned about peace in a conflict-plagued part of the world. Take a look at photos from each of the six Spring Break Global Partnerships trips, including more from Israel/Palestine.

Another trip that explored the tension between immediate impact and lasting change was to Israel and Palestine. Styles traveled there with a group of 11 students and one additional faculty member, the first time Global Partnerships has traveled to this region. The group attended the Christ at the Checkpoint conference at Bethlehem Bible College. They learned from and dialogued with other students and Christian leaders from around the world, discussing the responsibility of the global church in bring peace, justice, and equality to the Holy Land.

“A lot of us went in without our minds made up about the conflict between Israel and Palestine,” Styles said. “But then you meet people our own age who have college degrees, but know they’re not going to get a job. Or meet people who are just trying to get from their home to their job or to school and experience harassment or persecution. It’s hard to stay still and not to take action in some way.”

Junior Anders Fogel said, “I think I went in a little uninformed. I definitely went in with a little background knowledge, but not enough to have conversations about the issue—and it helped me see that I needed to learn more.”

Throughout the week, Fogel said his group was challenged to think in new ways about peace, their own sense of safety in the world, and how to stay engaged in the issues. After their conference experience, they also visited Holy Land sites, but saw them through the lens of their discussions of peace and conflict, not just as tourists.

“I had a hard time shutting off my ‘conflict meter.’ It was an interesting experience to be at the holy sites and understand the turmoil of the country in a new way,” he said.

Fogel, who had previously participated in other more “traditional” mission trips, described the Global Partnerships experience as leaving him with a “sour taste,” but in a good way. “We built houses on both my previous trips, and it was a ‘nice ending’ to the trip. I could look back and see the house and chalk it up on the ‘nice things that I’ve done’ list. This trip was different because there wasn’t that house built, or a ribbon to tie it up. It left you with a sour taste, knowing there’s a lot of work still to do, a lot of progress to be made. I left feeling that I don’t know what I really did, I can’t see the concrete examples—but I think that was kind of the point.”

These trips to Appalachia, Washington, D.C., and Bethlehem were just three of many experiences that North Park students are afforded through Global Partnerships. Styles emphasized that the trips themselves are often not the point, but hopes participants will continue to reflect on their journeys and ask, “What’s next?”

“A lot of students who come to trips already with a heart to be in missions or work internationally are able to take advantage of the opportunity to learn what missions is like, what they can do, and to connect with different partners,” Styles said. “Global Partnerships trips are some of the first steps of their journeys, not the last.”

Take a closer look at this year’s Global Partnerships trips.

Explore North Parker articles from 2013 and 2014 that feature the Zambia partnership trip with Spark Ventures.