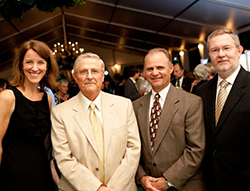 CHICAGO (June 26, 2014) — In response to tremendous efforts from alumni, donors, and staff, North Park University has been recognized by the Council for Advancement and Support of Education (CASE) with two 2014 Educational Fundraising awards. Using data gathered over a three-year span, CASE awarded North Park with national honors in Overall Fundraising Performance and Overall Fundraising Improvement for private comprehensive institutions.

CASE is an international organization comprised of more than 3,600 universities and nonprofit organizations in 82 countries serving over 74,000 advancement professionals. The award for Fundraising Performance “recognizes institutions that show solid program growth, breadth in the base of support and other indications of a mature, well-maintained program.” The award for Fundraising Improvement identifies institutions with “significant program growth across the three years of data.”

“Our success is defined by the deep generosity of the alumni and friends of North Park,” said Mary Surridge, vice president for development and alumni relations. “We remain ever grateful for their inspiring support. We are honored to have the generosity of our constituency noted by this respected national organization.”

“The awards from CASE provide recognition for the deep generosity of North Park's alumni and friends, and offer evidence of the gifted leadership and dedicated work by members of the University’s Development Office,” said North Park University President Dr. David Parkyn. “We’re deeply grateful for their loyal support and dedicated service, and are very pleased with the recognition brought to North Park from CASE.”

Recent fundraising efforts at North Park University have focused on Campaign North Park, a $63 million multi-faceted campaign that has seen the construction of the Nancy and G. Timothy Johnson Center for Science and Community Life, the solidification of North Park’s Annual Fund, an increased endowment for student scholarships, and the expansion of Chicago-based academic programs and faculty development.

“We launched Campaign North Park, the first comprehensive campaign in the University’s history, in July 2008,” Surridge said. “Immediately after we launched we found ourselves in a severely challenged economic environment. Our generous donors stepped forward at a time when their own resources were compromised to provide a record level of support. They understood that the future of North Park, and our ability to provide for our students, depended on them and they responded in a magnificent manner.”

Friends, family, and the extended community of North Park University are invited to celebrate one of the outcomes of the fundraising excellence at the dedication of the Nancy and G. Timothy Johnson Center for Science and Community Life, September 12–13, 2014. Events will also be broadcast online at www.northpark.edu/live.