Exploring Tensions Between Christianity and Literature at Harvard 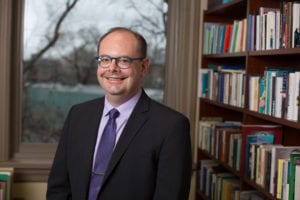 Dr. Gregor Thuswaldner, dean of North Park University’s College of Arts and Sciences and professor of humanities, is co-organizing the international meeting of the Conference on Christianity and Literature at Harvard Divinity School. The conference, which will take place from March 29-30, brings together more than 70 scholars from the US, Canada, the UK, Kuwait, and India.

“The Problem with God: Christianity and Literature in Tension” explores religious struggles from John Donne to Louise Erdrich and from John Milton to Marilynne Robinson. As the conference website states, “explorations of the problem of God have not been confined to theology and philosophy alone but have also been investigated in literary works. Numerous writers in the Western tradition, especially since the dawn of the Enlightenment period, have produced works of art that reveal religious tensions. Unlike philosophers and theologians, however, literary authors have often written about concrete problems literary characters experience with God. What’s more, literary works self-consciously wrestle with language in a way that can uniquely illuminate limits and generate possibilities for theological language. Countless writers from Goethe to Auden and from Dickinson to C. S. Lewis have investigated problems with the Christian God, doctrine, and practices. To this day, religious struggles have proven to be quite productive in literature.”