CHICAGO (February 21, 2012) – The president of North Park University, Dr. David L. Parkyn, told the University board of trustees that there is significant progress toward the goal of initiating construction on a new $42 million Science and Community Life Building. Fundraising continues to be a "top priority" of his office and the University Office of Development, he reported.

The University first began consideration of a new Science and Community Life Building as early as 2008, Parkyn said to the board, which met here Feb. 10-11. When finally completed, the project will "transform the face of the campus," he said. "Much more than that, it will transform the student experience both in and outside the classroom," Parkyn said. 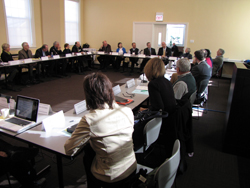 The board of trustees met Feb. 10-11 at North Park University.

Representing VOA, William Ketcham described preliminary building plans to the board. The building design is a work in progress and continues to evolve, he said. "It's about a place in the urban environment, it's about a spirit of community engagement with people in a place advancing education, advancing the mission of this institution," Ketcham said.

Among the organizations the University has consulted with are Health Education Research Associates Inc., for design assistance on science laboratories and other instructional spaces. The University has also contracted with the Boldt Company to serve as owner's representative and to facilitate the construction process, employing integrated project delivery techniques, Parkyn said.

In addition to $42 million for the new building, Campaign North Park set goals of $8 million for University's Annual Fund; $6 million for scholarships; and $1 million for Chicago-based academic programs and faculty development. Fund raising continues for all campaign goals.

The board received reports on other matters: