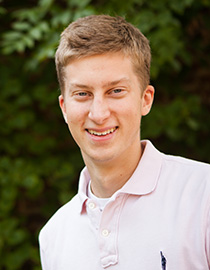 Aaron Nilson C’10 was always interested in international subjects, such as world history and languages. He developed a curiosity about people living in other cultures while he was at North Park and focused on a degree in Spanish and global studies, particularly the politics of Latin America. Outside the classroom, Aaron volunteered with refugees and immigrants through a local human rights organization, and added some basic Portuguese to his language skills.

During his senior year, Aaron applied for and won a Fulbright award. The Fulbright Student Program is the flagship international educational exchange program of the U.S. Government. Its purpose is to increase mutual understanding between the people of the United States and people throughout the world. In the past four years, Aaron and seven other North Park graduates have won Fulbright awards, sending them around the world for a variety of experiences.

Aaron’s Fulbright award landed him at the Universidade Estadual Paulista in São Paulo State, Brazil, where he taught English for a year following his graduation from North Park. Along with English, Aaron taught his Brazilian students about life in the United States. He found at least one creative way to share the American experience, using a favorite student pastime—American television. He established a group that would get together and watched DVDs of popular series. “The group would watch, and we talked about the different topics each episode explored. The students really liked it,” he said. Programs such as The Office and The Simpsons were among the students’ favorites, Aaron said.

Following his Fulbright year, Aaron came back in the United States, and  is now working with immigrants and refugees from all over the world at Catholic Charities. His experiences as a student and living in another country have helped him find success in this position. For example, language challenges were a particularly difficult aspect of his time in Brazil, he said. Most Brazilians speak Portuguese, and while Nilson’s basic training in that language and knowledge of Spanish was helpful, it wasn’t the same. “I certainly can empathize and sympathize with the people I work with here in the United States because of that,” he said.

Read more about all of North Park’s recent student Fulbright award winners in a recent article in the North Parker, North Park’s magazine for alumni and friends.