After two years of hosting the Annual Multicultural Awards Celebration virtually, North Park’s Office of Diversity and Intercultural Life (ODIL) resumed the event in person with community, food, and awards on Friday, March 25th, at Olsson Lounge in Nyvall Hall. Students, staff, and faculty members involved with academics, athletics, campus involvement, and community service were honored through the presentation of various distinct awards for their outstanding commitment to diversity, advocacy, and justice. 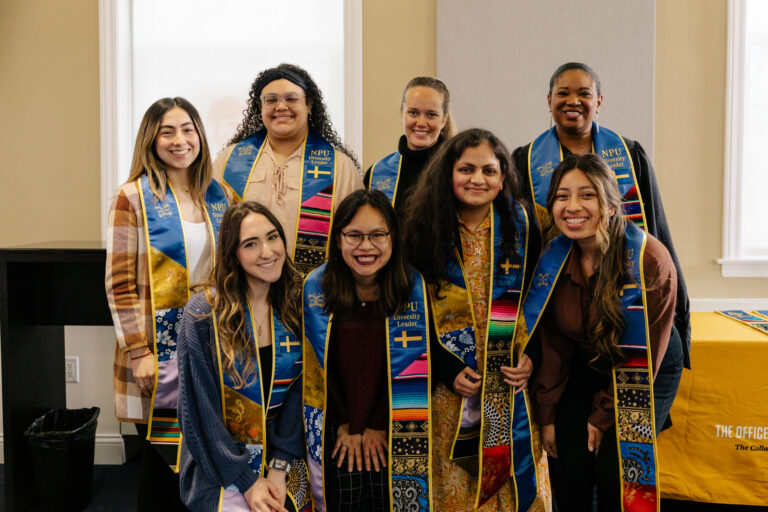 The Multicultural Student Leader Award recognizes graduating seniors who are current or prior executive members of North Park’s cultural clubs; student workers with at least one and a half years of service in the Collaboratory or the Office of Diversity; or prior Diversity Representatives in the Student Government Association.

Each award recipient is unique in their own way. Some of the awardees shared additional background on what this award means to them.

Irma Bahena, who serves as the Treasurer of the Latin American Student Organization (LASO) and as a Resident Assistant. Bahena works to maintain that at LASO everyone feels welcome and open to learning about the identities and backgrounds of its members. Bahena applies her interest in learning about different cultures to plan intercultural events and develop meaningful relationships. “I would like to thank those who acknowledged me for this award and everyone who gave me an opportunity to demonstrate my capabilities as a leader. North Park will always be a place I consider home. I will definitely miss the friendships and great mentors I had throughout my college years that guided me through this journey,” said Bahena.

As President of Rising DREAMers United (RDU), Destiny Correa works to create an inclusive environment that celebrates diversity. Correa says anyone is welcome in RDU and all students are welcome to join. Members can obtain important resources shared through the club. “Being part of RDU is a great way to connect with students across campus, so receiving this award means a lot to me because they see who I am and hear what I have done and that means something,” said Correa.

Lien Landin, who served as both the Vice President and President of Queers and Allies (Q&A) before graduating in December 2021, shapes an open and welcoming environment through the cultural club where everyone is encouraged to participate. “Being honored at the celebration is something that I never dreamed of, and I am overwhelmed by all the love and support this campus provided to me and others in Queer and Allies,” said Landin.

Utilizing her position as President of the East Asian Student Association (EASA), Mylan Nguyen, celebrates diversity through the club’s values of discipline, balance, ambition, and togetherness and by connecting with the community to learn about cultures.

“Receiving this award is meaningful to me as my efforts show that I cherish interactions. I carry my East Asian culture with me every day to show how dedicated I am to being a role model of EASA,” said Nguyen.

The Champion of Diversity Award, formally known as the North Park University Martin Luther King, Jr. Award, highlights a faculty member, staff member, or administrator that has conducted exceptional work in the areas of interculturalism, restorative justice, or racial reconciliation on campus. The recipient is selected by ODIL professional and student staff.

Dr. Peter K. B. St. Jean was selected as the recipient of the 2022 Champion of Diversity Award for his research and leadership in community outreach efforts through the Urban Peace Lab within the Department of Sociology and Criminal Justice, along with his commitment to diversity within curriculum, and a bold conviction towards facing and addressing issues on campus for transformative change. Dr. St. Jean serves as an elected member of the Faculty Senate and has been selected to lead the North Park Conversation Steering Committee, a task force that holds important conversations about race on campus. This academic year, Dr. St. Jean hosted multiple jam sessions in collaboration with the Black Student Union and the ODIL.

“Organizers, thank you for recognizing my role in this important collective work. The struggle continues to significantly reduce the victimizations that toxic legacies of white supremacy and arrogance in leadership have directly imposed as a career gravesite for People of Color on our beloved NPU campus. These growing pains are hopefully necessary precursors to our future triumphs of excellence,” said Dr. St. Jean.

The ODIL Director’s and Assistant Director’s Award recognizes a person or group for their outstanding contributions to the campus community through their involvement in fostering an inclusive and intercultural campus culture.

Reeves represents the LGBTQIA+ and commuter communities, advocating for equity, inclusion, and belonging. Reeves creates and keeps educational materials on hand that advocate and educate on disability rights, non-binary persons, and interfaith.

“I love the people I’ve met at North Park and they’ve made this place a home for me. It just makes you want to do what you can to make sure the environment at North Park is not only welcoming but has a sustainable energy to make sure that people for years will feel at home at this school,” said Reeves.

The Honors Convocation Diversity Award honors a senior for outstanding leadership and sustained commitment to advancing North Park’s intercultural core identity on campus and/or throughout the Chicago community. The recipient of the award is determined by the university’s Office of the Provost and the ODIL.

Initially joining SASA during her first year to connect with students of similar interests and tastes in food, Hans’s involvement in the club led her to various leadership roles. “I feel very thankful to be chosen, and I am excited to be honored! I have accomplished so much with my involvement on campus throughout my four years here, and this is all because I was inspired to create a change in whatever way possible,” said Hans.

Josephina “Josie” Summerville also received the 2022 Honors Convocation Diversity Award. She is a four-year member of the North Park Women’s Basketball Team, an elected member of the Student Athletics Advisory Committee (SAAC), a Resident Assistant, a Threshold Orientation leader, and a member of Q&A. Known as a member of the most talented and accomplished Viking Women’s basketball classes in recent history, Summerville also works to bring awareness of the positive all-inclusive and diverse identities of student-athletes. She has championed the promotion of LGBTQ+ inclusion and Black, Indigenous, and People of Color (BIPOC), advocating for belonging for all students at North Park University.

In addition to this award, Summerville has also been nominated for the NCAA Division III LGBTQ Student-Athlete of the Year Award by ODIL Director, Sharee L. Myricks, who serves as the NCAA Athletics Diversity and Inclusion Designee at North Park University.

“When I received this award, I immediately called my mom. She has been my backbone, but I have been her teacher in what it means to be me in this changing world. This award shows my identity, and I am honored, blessed, and hope that the next person will take this role and honor it fully,” said Summerville.

The Outstanding Intercultural Alumni Award annually honors and recognizes an alum who has shown outstanding involvement, initiative, and/or collaboration to give back to the ODIL at North Park in the areas of interculturalism.

This year, Katelyn Johnson ’04 was selected as one of two inaugural recipients of the Outstanding Intercultural Alumni Award. Johnson graduated from North Park with a B.A. in English and served as a devoted member of the Black Student Union and the President of the Student Government Association (SGA). Johnson currently serves as the founding Executive Director for BlackRoots Alliance, a nonprofit organization committed to the safety and liberation of all Black people through collective work that builds political, social, and economic power in Black communities. Additionally, Johnson advocates for racial equity, is the author of at least six publications, is the leading advocate for the campaign to raise the Illinois minimum wage to $15, and is an instrumental role in the success of the “Grow Your Own Teachers” program intended to diversify the teaching profession in Illinois.

For years, the BlackRoots Alliance has offered internship opportunities for students for experience in non-profit management, civil engagement, and grassroots organizing. Additionally, Johnson has offered personal mentoring opportunities to students. In collaboration with the ODIL, she has provided directional guidance for successful outreach to Black, Indigenous, and People of Color (BIPOC) alum engagement, such as the upcoming Diversity Alumni Caucus. Johnson’s efforts have directly increased communication, financial contributions, and involvement from BIPOC alums to the ODIL and diversity clubs.

“This award is incredibly meaningful to me. North Park created the conditions that inspired me to work for racial justice and a lot of that inspiration came from clubs and programs that now exist within the Office of Diversity,” said Johnson.

The ODIL also selected Bree Yoo-Sun McLuen ‘10 as one of two inaugural recipients of the 2022 Outstanding Intercultural Alumni Award. McLuen graduated from North Park with a B.A. in English with a focus in Creative Writing and served as a devoted member of the Black Student Union and as a student-athlete on both the Women’s Track and Women’s Cross-Country teams. McLuen currently serves as the Immigration & Development Coordinator for the Hanul Family Alliance, a nonprofit organization that provides support to Korean and Korean American seniors and families. She also works to uplift the Korean American community, advocates for women and children, is an emerging author, and recently became the CEO of Wonhwa Warriors, LLC.

McLuen and the Hanul Family Alliance hosted immigration and legal services sessions for students during the second annual Undocumented Student Awareness in collaboration with the ODIL, which aided undocumented students to become better informed on current DACA processes and community immigration services. Her efforts have also led to engaging students and staff in community service at the Hanul Family Alliance, where participants volunteer as food packers and drivers to support local seniors.