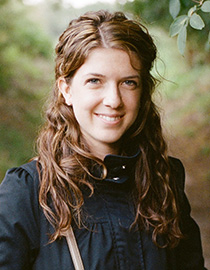 When ESL instructor Sharon Hughes C’10 asked her Latino students if they had any friends who spoke English, not one person raised a hand—even though many of them had lived in the United States for years. So she paired each adult student with an American pen pal. After months of writing letters back and forth, new friendships formed and her students learned to express themselves more in English. The project culminated in face-to-face meetings that were captured in the documentary One With Another.

More recently, Sharon’s students had plenty of opinions when she asked them their thoughts on immigration reform. So she assigned them to share their feelings—and their hopes and dreams for living in the United States—in letters to President Obama. While most of her students are undocumented, they work in jobs all over the city. “They are a huge part of the fabric of the U.S., but they work undercover and they’re scared of being deported,” she said. “They just want their voice to be heard.”

Since starting her job as an ESL instructor in Chicago’s Logan Square neighborhood in 2010, Sharon has designed an ongoing project each year for her Latino students to share their life stories in English. Her ideas come from asking questions and a desire to use creative storytelling projects in her classrooms—all of which she connects to the Practicum in Sociology course she took at North Park.

Taught by Professor Lida Nedilsky, this class placed students in Chicago-area schools, where they used observation and interview skills to develop a service-learning project that met a need at the school.

In Sharon’s case, she worked with a team to create an afterschool program for a group of middle school students to share their lives and cultural identity through photography. The class exposed her to the diversity in Chicago, the opportunities to work with immigrant and refugee families, and how healing it could be for them to share their stories.

“The Practicum helped me see that when you step into education, you can be creative,” she said. “That was the framework that I stepped into in teaching ESL—how to draw out people’s stories and ask questions.”

Sharon first became interested in education initiatives around the city after taking justice in education, a sociology course that took her into a school near where she now works and led to her decision to take the practicum and other sociology classes as a global studies major. A study abroad experience in Costa Rica further solidified her interests and Spanish language skills. After three years as an ESL instructor, she is pursuing graduate study in teaching English as a second language.

“There’s so much value in welcoming visitors to Chicago,” she said. “There are so many immigrants and refugees who need to be welcomed and have a place to share their stories.”