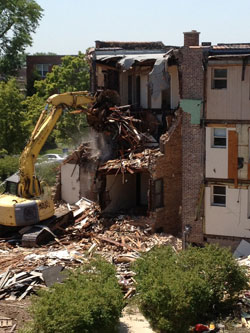 Preparation for the Johnson Center construction site has included the demolition of campus apartments.

Shortly after the conclusion of the 2011–2012 academic year, large trees were relocated from the north berm area of the proposed construction site (an area sometimes referred to as the University's temporary nursery) to other locations on campus, clearing the way for the building site in the center of the campus. "The berm of trees was designed more than a decade ago with the thought of relocation at some point in the future," said Dr. David Parkyn, North Park University president. "It showed considerable forethought on the part of those involved at that time, including our landscape architects. It has served us very well, and it now provides a great bonus to select parts of the campus."

The University also worked with electric supplier ComEd, to relocate a significant electrical conduit, said Carl Balsam, North Park University executive vice president and chief financial officer. This week, work to remove some campus apartments began, and is expected to take several days, Balsam said (see a time-lapse video). "These are among a series of steps necessary for clearing the site in preparation for construction," Balsam said.

A formal groundbreaking ceremony for the 101,000-square-foot Johnson Center is planned for October 26, with construction expected to be completed in time for the 2014 fall semester.

Make a gift for the Johnson Center and Campaign North Park.

Check out photos from the demolition days.