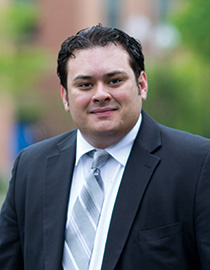 Gerardo Soto had five years on the job as a human resources professional when he enrolled in the master of human resource management (MHRM) program at North Park University. “I felt the need to solidify my training in the field and develop the skill sets I needed to function more fluently in my position,” Gerardo says.

Several courses contributed to this effort as he continued to work full time at the packaging company, Amcor Flexibles, throughout the program. His Compensation and Benefits class was particularly relevant, Gerardo says, because it is often an area for improvement among human resources professionals. “You’re taught the methodology behind it and how to work within the parameters of a compensation structure,” he says.

Another class, Building High Performance Teams, was taught as an intensive course in Lake Geneva, Wisconsin. The experience began with putting together groups of four students who had never met before and turning them into a high-performing team through a ropes course and other team-building activities. “That’s important to me,” he says. “I try to assemble teams and make them as efficient and effective as possible.”

North Park’s low student-faculty ratio and convenient location were big factors in his decision to enroll in the MHRM program, where he found faculty brought tremendous knowledge and expertise to the classroom. Their different styles and philosophies helped him become a more innovative, creative thinker, while teaching him many skills that improved his job performance. Professor Catherine Marsh, in particular, taught him how to operate in a corporate world and the art of negotiation. “She brought a soft–skills approach to negotiation from a human resources perspective and taught how to deliver an aggressive message in a passive tone,” he says.

His company recognized the skills he developed in the program. Gerardo, who is also earning an MBA degree at North Park, was promoted a few months after graduating in 2012 to senior human resources generalist, where he handles employee relations, staffing, talent development, and compensation and benefits.

Gerardo recommends the program for developing hard working, ethical, and results-driven human resources professionals. “The top three competencies that this program helps you build are leadership, team building, and ethics,” he says. “It will open doors to people who choose to engage in it.”